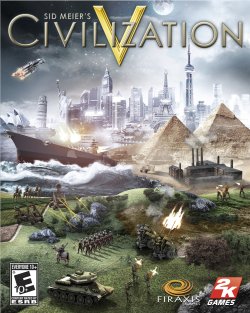 All these years this game created thousands of fans and it seems that Civilization V became on of the most friendly games in this series, featuring the right amount of goodies both for beginners and for veterans. Basically, Napoelon meets Oda Nobunaga in 3460 BC, Russian Ekaterina 1st meets Hiawata, Persia’s Darius I protects Singapore and Copenhagen which in a mysteryous way are placed on the same continent, and the examples could continue. Civilization V does not concern about accurate historical events but gives players a freedom to carry on the heights of glory one of the 18 nations available to play with.

As there is no story available, the player has only the option to conquer and colonise other nations, with many options to choose from, from the number of nations, types of wins, size of the map and many other features related to the gameplay. The first notable change is the transformation of square into hexagons. Each nation starts with a single city and, as the game goes forward they town grows and adds new citizens which determines the need for more land owned.

Every piece of land can be improved with all sorts of construction, either on land or on water. Workers will build farms, mines, roads and other advanced buildings while they discover new technologies and pass into a new era. At any time, the player can create other settlers to expand and build new cities. However, growing to rapidly can be harmful if the people you run are not happy. And when people are unhappy armies do not attack at full force, construction last forever and so on.

At a first glance, the game might seem too complex with all the construction management, diplomacy, trade and wars, and they actually are, thus the people at Firaxis created one of the most user-friendly games ever with a simple interface any regular player should get used to. Unlike previous games, Civilization V does not allow anymore stacking your army with huge masses of troops and endless battles and this unique approach changes a lot the battles dinamique. Some items like espionage and trade in technology were removed, same for health, pollution and religion. A 300 pages PDF tutorial can be consulted in order to get to know this game deeper.

As for the troops, these can benefit from level increases and can gain all sorts of bonuses, from higher precision to the ability to travel more on water; veteran units can be improved – like Musketeers and modern infantry. Commercial treates, open borders, co-op for various technologies may be concluded only with nations and not with city-states. Once a city is conquered there are 3 options: annexation, maintaining it as a “puppet” or removing from the map. The last option might not be so clever while a conquered town can bring a fat income to your nation. Another important aspect of this game, as in real life, is money. With money you can buy adjacent land, important building, friendship and can help to improve the troops.

When it comes to the system requirements, Civilization V looks great on a DirectX9 powered PC as well on a DirectX10 one. From beginners to veterans, everyone will feel comfortable with re-shaping the world’s map in this complex and fantastic game.