Gears of War 3 out Now 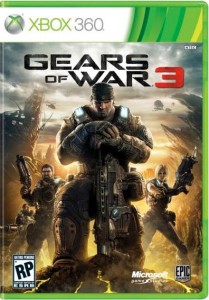 Gears of War 3 is now out and almost everyone with Xbox 360 is running no game but Gear of War 3 on their console. Gears of War 3 was a much anticipated game and so far it is living up to the expectations but we will see what happens when Modern Warfare 3 will hits stores in few months since then it is all Gears of War 3.

The real theme of the campaign is pretty much of the same as you have to fight and efface every non-human thing or aliens that come in your way but as far as the scope of the game and its execution is concerned the game is very profound and epic this time.

After playing for about only 20 minutes you are faced with the first boss of the game, an ugly monstrous fight that fulfills your appetite for epicness and brutality. The game commences between the main guy Marcus Fenix and Augustus Cole also known as Cole Train.

This time around you are faced with two enemies one gooey and the other grubby, the Lambent and the Locust. Battling for your survival as the human race is deteriorating by more and more casualties, the Gears of War 3 is a perfect blend of action and thrill.

Another great thing about GOW 3 is the co-op play. They have moved from two player co-op to four playrer co-op, this might not sound great but once you experience it then you come to know about its significance. It creates an air of camaraderie among the players.