Indian Firm Getting into Video Games 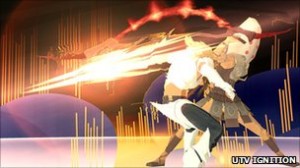 An Indian firm is aiming to be a global player in the video games market.

The first of these – a action game called El Shaddai, inspired by the Book of Enoch – is due for release later this year.

But Piers Harding-Rolls, an analyst with Screen Digest, said that it was a “tough market” to launch new brands.

Mr Screwvala told BBC News that UTV was expanding into the global games market, as it was the next logical step for the firm.

“In India, we are already the number one movie studio in the country and we have five genre specific television channels too,” he said.

“We were looking where we could drive content and the creation of intellectual property (IP) content, because that is where we believe maximum wealth can be derived.

“And that is where games came up. We looked at the geography, there were limitations where India is concerned – except for mobile platforms – and so we needed to expand our market.
Continue reading the main story
“Start Quote

Mr Screwvala said that his firm made a number of acquisitions two years ago, buying up an Indian development studio specialising in mobile gaming, UK developer Ignition and has set up a separate development studio in Gainesville, Florida.

The firm has three console titles currently in development and is now looking to secure a distributor before the games are released.

Mr Harding-Rolls said that releasing new IP into a mature market was not without risk.

“When you get past a certain stage in a consoles lifecycle, the titles that work tend to be sequels and reworking of existing contents,” he said.

This is due, in part, to brands being established in the minds of gamers.

“If you’re coming fresh to the market, you are not going to get the benefit of that, because by the time they look to release potential sequels there could be a new console,” he added.
New consoles

Screen Digest thinks that there will be a new XBox and Wii by 2013 and 2014 for a new PlayStation, although they said that estimate would be “at the earliest”.

“There’s less money being spent on games compared to last year, but games are still selling and its a substantial market, albeit declined slightly year on year,” said Mr Harding Rolls.