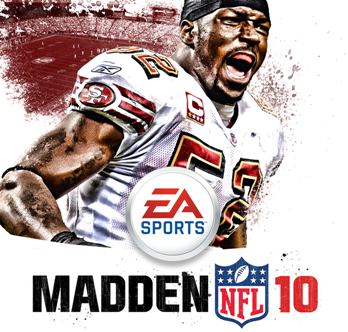 For over 20 years now, Madden has been the number one name when it comes to football simulation video games. Year after year, the Madden NFL series from EA delivers the deepest and most realistic football experience you can find in the virtual world. Madden NFL 10 is no exception to this rule.

Madden 10 brings about a new technology called Pro-Tak that gives the player complete control of the game at every level. Whether controlling the quarterback and dodging an incoming blitz or controlling a defensive lineman trying to bring down the opposing running back, you have a new level of control that ensures the play goes your way. More players than ever can get in on each play, with up to 9-player tackles. Pro-Tak also brings offers a ton of new gameplay options. Quarterbacks get new dodge moves; the offensive line has new and more realistic blocking mechanics, and much more.

One of the most popular options in previous Madden games has always been the Franchise Mode, which lets players take control of a team and build a winning legacy. Until now, it’s always been player vs. computer controlled AI teams. With Madden 10, however, the competition is moving online. Players can enter 32-team leagues and get an experience that’s as close to running a professional football team as you can get without actually doing it. Players can take part in more than just games – there are also realistic drafts and player trades. This online franchise mode makes it easier than ever to connect with other Madden players thanks to automatically generated league websites and message boards.

Aside from the major gameplay changes, each new generation of Madden also introduces some great new graphical tweaks that help the game look more realistic. Madden NFL 10 gives every player on the field a better sense of awareness, making them follow the ball around with their heads and eyes, just like real players. There are also a lot of little touches, such as new pre- and post-game cutscenes showing players preparing for or cooling down from the game in a variety of ways. You’ll even see the “chain gang” come out on the field to measure close calls for first downs.

Key Features:
– Sign into Online Franchise mode and face off against up to 31 other players in your league – both in games and over the bargaining table as you fight for trades and draft picks
– New Pro-Tak animation technology allows for bigger tackles and new areas of gameplay control
– A more authentic recreation of a real NFL football game than ever before, with enhanced graphics and commentary presentation, including a new end-of-the-week show called “The Extra Point”
– The series debut of cooperative play – team up with a friend and take on the computer online
– A revamped injury system maintains the suspense of real injuries as medical staff rush onto the field and the actual injury isn’t immediately revealed
– A new fumble mechanic that requires players to match a button sequence to recover fumbles