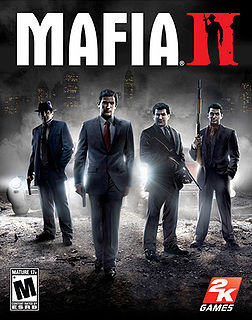 First Mafia title was the best mobsters game ever created,  that’s a fact. Even from the start, the infernal auto race was opening what it was a hard, but fantastic action game. After 8 long years, the Mafia families are coming back in action, in a historical period where illegal activities were flourishing : The WW2 and the ‘50s. The main character is Vito Scaletta, the typical Sicily boy brought to America by his parents, chasing for the American dream. The story is very alike with Mafia movies like « Bronx Tale » and others : while chasing the American dream, parents end up with a miserable job and their son takes it on other ways, and this is exactly what happens in Mafia 2 as well.

Vito is lucky so instead of getting to jail he goes to the front where he becomes a here with medal. However when meeting with his old robbery buddy, Joe, his life turns 180 degrees to theft, from small to bi gones and large-scale murders, which at one particular time connect this game with the first one. The story contains all the elements necessary for a respectable mafia intrigue : families rivalities, new comers seeing drugs as a bright future, betrayals and friendships. Overall, a great combination.

The action takes place in Empire Bay metropolis and beside the main missions the player can walk through the cities and continue the story from different perspectives, depending on his choice. Any car can be stolen and crushed in the style of a veridic thief. As thief, for stealing a car one can break the glass or unlock it using some thief tools, but probably the best way is to place in front of a car, beat the driver and steal it. A nice added feature is that plates can be changed in order to get rid of police.

Most missions involve scandals, shootings, enemies in considerable numbers and body to body fights. Whether the player must kick some enemies to save his life, or just to beat inocent people, Vito will deal with these as he should : violent way. When taking bullets, the life points are restored like in Call of Duty by walking away from those guns and stay covered for a few seconds. Although a lot of bad things can be done through this character, many people say it lacks the possibility of robbing more stores, beating women on the street, or anything other mobsters-wannabe would like to see in a game.

As we said, all the actions are related to cars and weapons, moreover, one can even steal a police car, of course, with the appropriate adrenaline involved. Weapons range from the iconic Thompson to Magnum pistols, shotguns, grenades and incendiary bottles. The graphics is controversial as always while some saying it looks good, others that it’s so not 2010th-ish.

Mafia 2 is a great sequel of the first title, but as nothing is perfect it could have faced some more improvements as well : could have been longer, the producers could have added more secondary activities, the graphics could be better and so on. In the end, it’s a great game based on real 50’s stories like paid murdereds, fights for territory, extortion, drugs traffic, all done dressed in an elegant suit and driving luxury stolen cars.