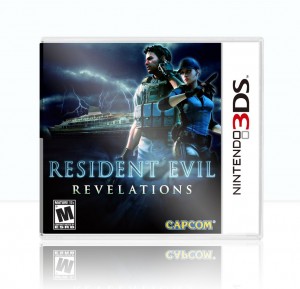 New updates regarding Resident Evil Revelations have been put on the Japanese official site of Resident Evil Revelations which shows some latest details which would increase the Resident Evil fans appetite. As it was told before that the new game will be based on old classic style and the developer Capcom really means it.
You will find this Resident Evil a little bit low in terms of action but less action does not mean removing the basic gameplay mechanics. All the combat features, martial arts and daggers, it is all there along with it is the emergency evasion which allows to dodge the enemies assaults by responding to the perfect timing, just like in Resident Evil 3. Besides dodging you can also perform a counter attack, with the help of counter attack you can knock your enemies down and shoot and kill them while they are knocked down. 3DS touch screen will be fully utilized to make the gameplay more profound including solving puzzles and all.
As far as the story board goes, there is nothing much yet but the story of Resident Evil Revelations is divided into intervals and in the beginning of each chapter a video review will be shown that will revise the events that had happened so far, similar to Alen Wake. Updates also include a character named as Rachel with a little injury in her arm. Her outfit bears the resembles to that of Jill, a wetsuit and she appears to be a special forces agent as suggested by the website.