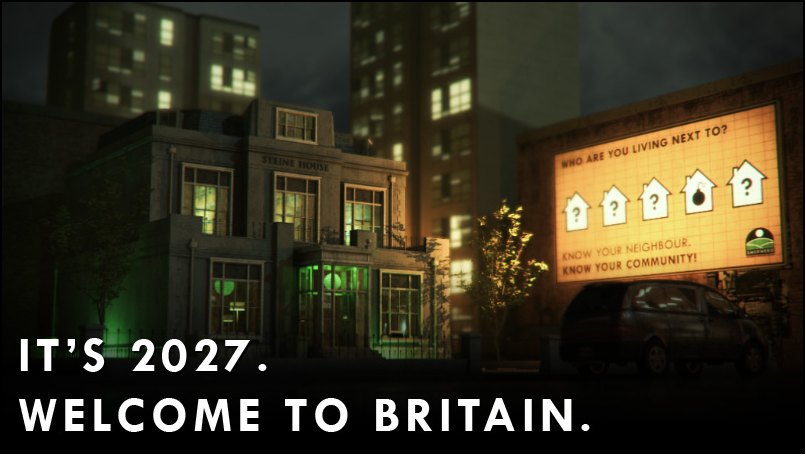 Channel 4 is preparing to launch an adventure game with a spice of political thriller theme of trust on July 28th, this year. The Curfew is written by a Marvel writer – Kieron Gillen – and designed by the well-known agency LittleLoud and it is a browser-based game for teens aging 14-19 years old. It combines a challenging gameplay with a political intrigue and is set to make the gamers asking themselves « who can I trust ? »

The game takes place in 2027, not too far away, in an authoritarian security state, with a concept inspired by today’s political decisions. The Curfew’s primary target is young people and tries to play an educational role while it presents the freedoms teens enjoy nowaday in a mirror with the potential dangers in they do not protect themselves. It’s a game for right questions, political involvement and fight for freedom.

The key characters of this game are Aisha, a hardworking Iraqi immigrant in UK, Leah the dissident – an enemy of the current system -, Saul, a 40-year-old ex-cop working in security and Lucas, a bored young boy, antisocial and rebellious. The Curfew presents those four characters captured by the curfew in a hostel, searching for how they end-up captured and sharing their stories one to each other.

The Curfew is compound of four episodes, each episode being based on each character’s story. The gamer is a young political agitator that obtains a disc containing information that could damage the government if released and searching for a trusted party to hand-over that disk. During the game the player will listen to those characters’ stories and in the end, right before the police entering through the door, he must give the disk to the character he trusts upon his stories.

Although this is an imaginary game, curfews actually exist in UK, spreaded in over 1,000 towns. There, anyone under 16-years-old found on the streets after 9pm can be sent home by the police. The games comes as a response to latest civil liberties and freedoms that have been outlawed.