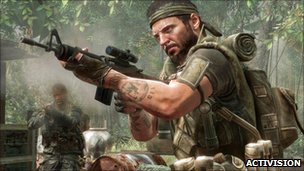 The eagerly anticipated sequel to the biggest selling video game in history goes on sale tonight.

Thousands of gamers are expected to queue at over 400 stores in the UK to get their hands on a copy of Call of Duty: Black Ops.

The title goes on sale at midnight, with special events being held in cities across the globe.

Its predecessor, Call of Duty: Modern Warfare 2, generated more than $1 billion (£618) in sales.

That puts it in an elite club of billion-dollar entertainment giants such as James Cameron’s Titanic and Michael Jackson’s Thriller.

Call of Duty: Black Ops is the seventh game in the series and the third to be developed by US based developer Treyarch.

Piers Harding-Rolls, an analyst with Screen Digest, told BBC News that he thought Black Ops would do as well, if not better, that Modern Warfare 2.
“We’re looking up to 18 million units sold worldwide, putting it in the same league as Modern Warfare 2,” he said.

“This edition also has a [Nintendo] Wii version and while the average Wii owner probably won’t be that interested, it does mean that the potential market is a bit bigger than before,” he added.

Gamers play as a CIA operative or Special Forces agent; members of a clandestine agency tasked with uncovering a Soviet chemical weapon code named Nova-6 during the Cold War.

In addition to standard ground combat, Treyarch have added a mission in which users control a Russian Hind helicopter, as well as flying US spy planes.

There is also a bonus multi player level where users have to defend Washington from waves of flesh-eating zombies.