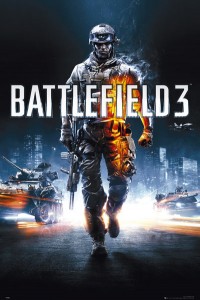 Battlefield bad company is has made its mark in the gaming world and is known for its highly augment visuals and graphics and great sound and gameplay. The franchise has so far produced two parts and they were great both visually and story wise and at E3 Battlefield manifested a teaser of Battlefield 3 which is another addition into the franchise.

At PAX, I managed to get my hands on Battlefield 3 and it was fantabulous. Just outright an awesome looking game, Battlefield rivaled the FPS giant Call of Duty and after playing Battlefield 3, to be honest even I’m not sure who is going to win, but I have a feeling that it would be Battlefield. After playing a quick sort of demo of Battlefield 3 I can say that the environment looks so exquisite, sound effects are splendid and weapons looked realistic and controls were very responsive. I played the PlayStation 3 version of Battlefield 3and it felt great.

The co-op mode of the game looks great, the co-op mode is totally  based on teamwork and those who do not possess good enough first person shooter skills, like me, were able to manage the task quite well as gameplay is made for both pros and noobs. As compared to previous versions the game really stands out in terms of graphics, atmosphere and gameplay. As far as the rivalry against COD is still a question mark and it can only be decided by time, may the best game wins.